An Interview With Ray Raposa Of Castanets 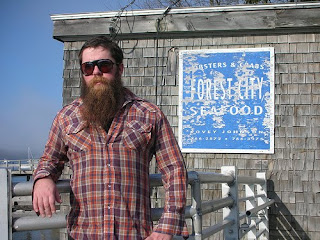 Everyone who knows me, knows that I am madly in love with the music of Castanets. There is something about the music of Ray Raposa that speaks to me, and is a constant companion in my journey of life. I was shocked when I asked Ray to do the first interview for Vitamin Burger, and he accepted. He is a very smart guy, and very gracious to his fans, here's what he had to say to me(in his own words).......

VB: First off Ray, let me say congratulations on your new record, Texas Rose, The Thaw, & The Beasts. I know that it's not officially out till the end of the month, but I have had the pleasure of hearing it many times, and I consider it to be your masterpiece. What is the significance/and or the meaning of the title??

RR: Well, long story, but the thaw comes after the freeze, and the beasts come out when it's warm. and cold. They're always there I guess. Forget it. The roses(and "Roses") in Texas break hard hearts.

VB: To me, some of the elements in the new record, have a more Rock & Roll style. For example, the backing vocals in "Rose", remind me a lot of Queen, and the guitar solo and it's aftermath in "Down The Line, Love", remind me of Pink Floyd. Was this a conscious decision, or just the result of playing so many shows?

RR: A bit of both maybe. The shows always have an element of that so I suppose it's a good thing that half and the recording half are resembling each other more often. I mean, we burn through a lot of FM radio classics on the tours and I love a good guitar solo. Couple things like the Rose vocals are total studio surprises though. Don't see em' coming til we figure they're the right thing to do and then they're done. I do hate Pink Floyd, but I realize that I am in the wrong to do so.

VB: As a fan, I have noticed that Castanets songs fall into two distinct camps. First, you have the more straightforward "pretty" songs like: This Is The Early Game, We Are The Wreckage, As You Do, & Down The Line, Love. The you have the more abrasive songs with the "electro-freakouts", as I like to call them, like: Rain Will Come, You Are The Blood, & A Song Is Not The Song Of The World. Do you feel like the dichotomy in your songs is your niche, or do you see yourself in the future, settling into one style more than the other?

RR: Well, they're kinda the same thing to me, maybe? I never have to split em' up like that so I wouldn't be much good with eyes toward the future on that front. If a song needs some blur, or a disguise, or some dirt, it's gonna get it. Comes clean otherwise.

VB: Rafter(your producer), seems to be an invisible Castanets member, as he brings your sound to be fully realized. Do you see yourself continuing to work with him, or would you like to try another producer?

RR: He's a total magic machine. I'm lucky to know the guy and to work with him. The two of us have played/tracked enough together in the past to be able to get through a lot of non-verbal collaborative work. Two years from now I'll probably be able to point to like, a street sign up a little hill a ways, and he'll know just what I think that sign oughta sound like. Which speaks as much to his sensitivity, ability, and patience, as it does to my poor communication skills. We've recorded a couple of things since these sessions, and if those are anything to go by, it looks to only get better.

VB: I've noticed that lately you are doing a lot of shows in the Portland area, is that your home-base now?

RR: Yeah, I have been there for a bit. Backyard, housemates, bed, the works. It's my third go at living there and it seems to be sticking this time. Still gone for most of the year, but I am not paying Brooklyn rent for time away anymore. We're kinda on the far edge of town, so I can bike southeast for two miles or so and hit farms, or north a few minutes and hit strip clubs. Kinda ideal.

VB: Unfortunately, I didn't get to see you on this tour, as you didn't come to my area. But from the reviews that I have read online(namely, Austin), some of the reviewers, while admitting how mesmerizing your set was, complained about the length of it. Was there a reason an artist like yourself, with such an extensive back catalog, kept the sets so short?

RR: Well, that night was a four band bill, and we were up at 1 am so.........short was the way to play, but even besides that I usually feel that brevity is best. I almost never see a band that holds my attention for an hour(Ghost most recently was the closest), and that weighs pretty heavy on my idea of a good set length. Also, I've got a pretty bad sense of time and with us not using set lists, I think we can sometimes feel like we have been playing longer than we have. General rule is: not under thirty, never over 55, I guess. It's usually about what feels appropriate for the venue/bill/crowd. Can't be right by everyone.

VB: You have been doing this as long, or a lot longer than some of the big success stories of your genre(Iron & Wine, Bon Iver), does it ever bother you, that your level of success isn't greater?

RR: Heck yeah it does! What are you gonna do though, you know? I stop just short of picketing when Bon Iver comes through town. Also, I am well on record as hoping I have far less to do with that scene than most folks would have me to. Willful ignorance maybe?

VB: I have read in the past that you have a great appreciation for Black Metal(as I also do). You are also known for achieving some gnarly-assed tones on your guitar, have you ever considered doing a BM project?

RR: I can, and I might. Nobody is gonna know under all of that paint, and I won't be telling. It's not gonna happen if the riffs aren't all the way there though. We'll see.

VB: Ok, if Matthew Houck is our generations Willie Nelson, and you the Hank Williams, who does that make John from Deer Tick?

VB: I know that you are about to head to Europe on tour, but what's next for Castanets?

RR: About half of the new record is written. Gonna record that when the time comes. Some soundtrack stuff is happening next year, excited about that! Tour, Tour, Tour. Sin, Sin, Sin. Bright lights, dark rooms, secret triumphs.

VB: Well, since Vitamin Burger is also a film blog, can you tell us your 3 favorite films of all time, before you leave?

I want to thank Ray so much for taking time to talk to me, and answer my questions. If you guys haven't heard Castanets yet, please do yourself a favor, and change that right NOW!!!
Posted by Mitch at 12:41 PM