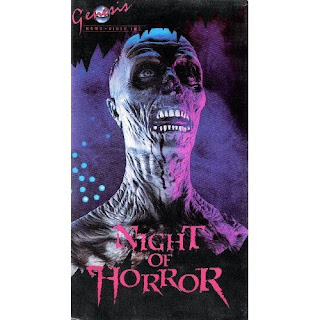 Horror fans, myself included, can be a very masochistic group. We will go out of way to see a film that we have heard is the "worst horror movie ever made". I am very guilty of this and have seen some real stinkers in my time, but Troll 2, Savage Water, Axe Em', and Scream(1981), have nothing on Night Of Horror! I had seen the horrendous cover art in the video store for years and never actually rented it. Years later I read about it on IMDB, and by the way it was reviewed, I knew that it was something that I HAD to see. Then last year, several people over at The Body Count Continues board kept telling me it was in fact, the worst movie ever made! I knew that I couldn't find it, as it has never been released on DVD(rightfully so). So a friend from the boards sent me a DVD-R copy of it. For some reason, I never found myself in the right mood to see such a film, I mean some preparation had to go into this. Today, I found myself alone in the house, and suffering from a cold, I already felt bad......so why not?

Most "bad" films can be listed in the "so bad they are good" category, or at least have some redeeming qualities. The kind of film that you want to show to your friends, so you can all crack up at how horrible it is. Night Of Horror is NOT that kind of film! It is just plain wretched and horrible, and it has NO redeemable qualities at all. It was made in 1978, but looks at least 10 years older than that. The script is so bad, you would think it was written by an elementary school Drama class. The lighting looks like it was provided by a single spot light, and there are smudges on the camera lens that stay on there for extended periods during the film. I would not recommend this film to ANYONE, not even fellow bad movie enthusiasts.

The plot or story, if you can call it that, goes like this. The film starts in a bar(which is actually someones basement, attempting to look like a bar), two guys mumble incomprehensibly for what seems like forever. One of the men is a "California Rock Star" and the other is attempting to coerce him into re-joining the band. The reason that he can't is that he has suffered this horrible ordeal, and the telling of this ordeal is the entire movie. Rock star and his brother and 2 females are driving cross country to check out their dad's cabin in the woods. They drive a ramshackle RV that looks like it wouldn't make it two blocks. One of the girls reads a poem forever, and says that she is clairvoyant. They drive and talk forever, until they come across a gaggle of Civil War "ghosts". Which just looks like some bought stock footage of a Civil War reenactment, and stuck it in the film. Then they bury a plaster skull in hallowed ground and the film is over. Shoddy, horrible, atrocious, all of these are not enough to describe this film. I am glad that it's not readily available, because I don't want anyone else to waste 75 minutes of their life like I did.
Posted by Mitch at 10:44 PM No comments: 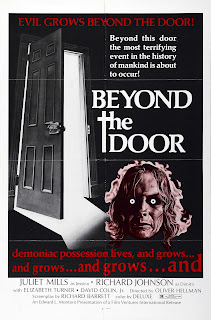 I have always had a soft spot for this Italian made Exorcist rip off. I remember seeing it and Beyond The Door part 2(Mario Bava's Shock), together at a drive in when I was a kid. Both of the films, even though Shock is not an official sequel, scared me to the core, and I could not shake them. Juliet Mills stars as a well to do housewife, that while pregnant, becomes possessed by the devil. The film is not very well made, and is very derivative of the aforementioned Linda Blair film. But is has a sense of humour that is out of this world, and that makes all the difference to me. Jessica's children are completely hilarious, Gail her daughter, curses like a sailor, and Ken the little boy, drinks soup out of a can with a straw the entire film. The script is horrible, and the music sounds like really bad lounge music. In no way can I claim that this is a "good" film, it's just very fun, and very nostalgic to look back upon. If you have to see every possession film, and have yet to see Chi Sei(Beyond The Door), run out and rent this one right away, you most definitely don't want to purchase it.
Posted by Mitch at 3:23 PM 1 comment:

The Swans are an emotional tour de force. The band formed in 1982, as a part of the influential "No Wave" scene. Micheal Gira, the mastermind and mainstay behind the Swans moniker, carried on in various lineups until 1997. When they broke up, many of us diehards were disappointed, but he quickly formed a new band called, The Angels Of Light. While Angels were a brilliant band, they tended to tread lighter notes, and not have as much vitriol as Swans. I enjoyed both bands, but Swans had that foreboding, menacing, quality that not many bands outside of the Metal circles could rival. So when I heard that Micheal was reforming the Swans, I was ecstatic. 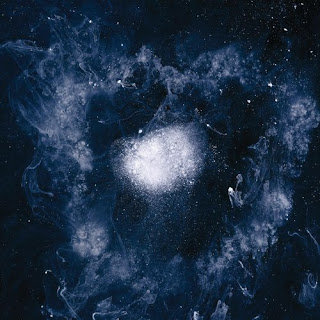 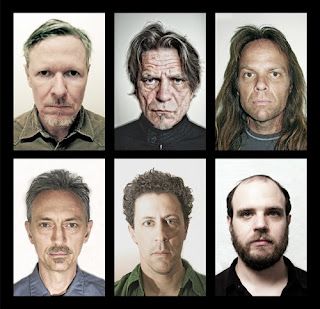 The first product of the new lineup is the new CD, My Father Will Guide Me Up A Rope To The Sky, and it is absolutely brilliant! It captures everything that I love about Swans, but adds a mellower, more acoustic beauty that he explored with Angels Of Light. The record is relatively short and to the point, and I think that it could gather Swans a whole new fan base. Many diehards are upset that Jarboe, the female chanteuse that was the yang to Micheal's yin, is not along for the ride. It bothers me none at all because the record is that good. For those who are not familiar there are elements of Sonic Youth, Glenn Branca, Jandek, and many other "outsider" artists to the Swans sound. But it is nigh impossible to give you a straightforward description of the music. If you are an adventurous listener, and stray far outside of "pop" music, you might wanna give it a try, you might be glad that you did.
Posted by Mitch at 2:22 PM No comments:

Brian McBride:The Effective Dissconnect(Music Composed For The Documentary "The Vanishing Of Bees" 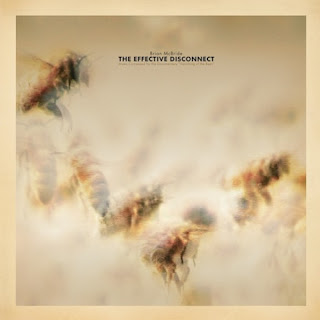 Brian Mcbride is one half of the ambient/drone duo, The Stars Of The Lid. The music that he composes is so beautiful and otherworldly. Very similar to Classical Music, only a lot more minimal, and definitely more spacey. It's the kind of music that you put on and drift away to another place. For those of you who meditate or do yoga, this would be perfect for you. It's definitely not something that you would want to listen to while driving, or cleaning the house. You will know when the mood arises, and you need something this soul cleansing. Like Brian Eno's best ambient records(Music For Airports, On Land) this has the ability to take you to another place. If it is appropriate for you, please check it out. I have not the seen the documentary that this was composed for, but it seems very interesting, and I will definitely check it out, when it hits DVD.
Posted by Mitch at 2:04 PM No comments:

My friend, the lovely Amanda By Night, and I were just discussing our similarities in emotion after making really big moves lately. Amanda from LA to Maryland, and myself from Florida to North Carolina. When you have lived in a certain place for a long time, and you move to a new city, things will definitely change. This is what we have dubbed "the Blue Period". I am almost through mine, although Amanda stated that she is definitely still immersed in hers. But to her credit, I didn't move from a hot spot like LA! My partner Jeff and I are lucky enough to have two really good friends here, and we have made some more great ones. That helps a lot in that we are not totally alone here.
That's the reason that the posts at Vitamin Burger have been really slow. I still have not started working, and that is a deafening blow to a man that has worked his whole life. You base your "worth" on your job, and how well you can provide for your loved ones. When you can't do that, you feel like a total loser! I feel like I have wasted the whole "creepy" month of Halloween, when I see how productive Meep over at Cinema Du Meep has been! Hopefully within the week, I will start my new job, and things will start looking up for me. Charlotte is a beautiful city, and there are definitely a bunch of creative things going on here. The concert schedule alone is enough to make me salivate. When I am able to attend some of them, I will be a happy man! So once again, I am asking my few loyal readers to stick with me, and things will start churning out again. Also, if you read VB regularly and you haven't signed up as a follower, please do so. When blogs try to get sponsorship, they look at things like that. I appreciate each and every one of you. Almost through the blue.
Posted by Mitch at 2:59 PM 4 comments: