If you have not seen the trailer above, then either your head has been in the sand, or you are not a Horror Movie fan. As you probably know, I am the latter. I have been obsessed with Horror Films since I was about 5 years old. I know that's a little young to start watching them, but as I am 40, and I haven't went ape shit crazy and killed people, I think I am OK. As most Horror junkies will attest to, after seeing so many of these films, we are desensitized to them. That doesn't mean we do not like them anymore, or we have to watch them less, it simply means that it takes a LOT more to get us excited, or to scare the shit out of us! This film, V/H/S, has me that excited!! I can't tell you exactly why either? I am not a huge fan of the found-footage sub genre, unless it is really great(The Poughkeepsie Tapes), or does something completely different. But something about when I see that trailer, the small hairs on my arms stick up, and I feel an aura of electricity around me. The same feeling I loved as a kid, when going to see Friday The 13th 4:The Final Chapter on opening night, you know what i mean. Of course, there are so many haters and armchair critics out in Internet land blasting the film already. That always cracks me up, especially when the film has not been released. I'm sure these dorks weren't blessed enough to receive a screener copy or anything? Any who? I am so fucking excited, I can't stand it, I want to see this movie BAD, and RIGHT NOW!! But, of course, like all new Horror Films, it is getting the shaft when it comes to releasing. It starts on VOD(Video On Demand) on August 31st, and then a small theatre release in early October. That means it will play in the 5 major cities in the US, and that's it, unless it does phenomenal numbers. Then it will be yanked off VOD with the quickness, and expanded theatrically. Anyone else not a hater, and actually excited about this aside from myself?/ Please leave a comment. 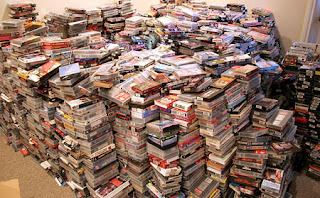 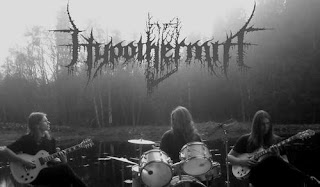 Hypothermia is a Black Metal band from Sweden. In most cases, you will see them labelled as Depressive Suicidal Black Metal, and as goofy as that term sounds it's pretty apt in this  case. The band was formed in 2003 by Kim Carlsson, who at the time was also in Lifelover, Kyla, & Life Is Pain. Since that year they have produced over 18 pieces of music, including LP's, EP's, Splits, and Singles. They are known for a few reasons, one reason that I love them is their ability to make very long songs(15-20 mins, is the average length), with only minimal chords in the songs(sometimes only 2 or 3 chords per song), and still make a very emotionally compelling and interesting song. Kim's vocals are definitely not for everyone, they sound like a lone banshee crying out in the night, in the most inhuman way possible. I have often wondered what state of mind he must work himself into, to be able to perform at such painful and excruciating levels? In the live setting he is known to cut himself deeply and many times, and his body is covered in a swash of scars that make him look like a tortured slave. As the years have gone by, Hypothermia have changed stylistically, and no longer have much Black Metal in their sound. The last few releases have been sans vocals, and have been very long minimal but building, guitar pieces. Almost sounding like past indie bands like The For Carnation, Slint, or The Sonora Pine. I personally hope that they keep this direction up, but still retain Kim's tortured howls, I think that would make for one of the most original sounds in the BM underground today. In case this kind of thing tickles your fancy, or sounds interesting, please check them out. Kim is not known for keeping bands together for very long, and Hypothermia is about to turn 10, so who knows, he might end it sometime soon? 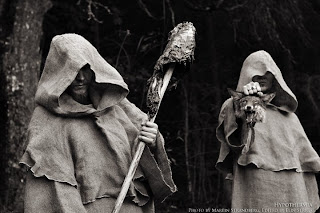 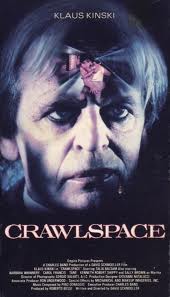 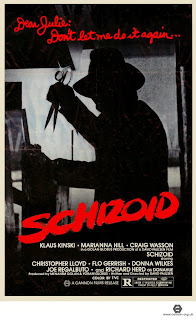 Klaus Kinski, where to begin? Probably one of the strangest actors to ever grace the Silver Screen. He looked very strange, and from the many stories I have heard, he acted even stranger. He was apparently not an easy man to work with, but I have always found him very fun to watch, and he played in one of my favorite Horror films of all time, Nosferatu(1979). The way he looked in that film scared me for years, and it seems that most people can agree that is best performance of all time. Recently on a podcast, someone mentioned Klaus, and I wanted to post pics and remind people of two slasher films he did in the 80's: Crawlspace and Schizoid. They are both great films for being slasher films, and I think his portrayal as the maniac in Crawlspace is a precursor to the Hannibal Lechter character. Crawlspace was released on MGM DVD, but is now out of print. Schizoid has never been released on DVD, but you can find VHS or a DVD-R copy of it, that one also features the great, Donna Wilkes.