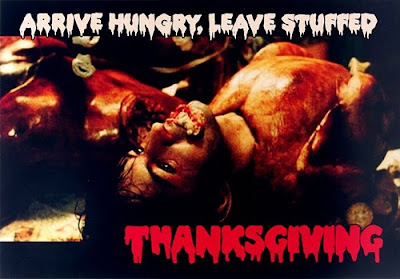 I just wanted to wish everyone a Happy Thanksgiving. I am not one who usually gets into holidays and all of their trappings. But, Thanksgiving is a holiday that everyone can get into! First, you get to eats tons of delicious food, get to see family & friends, and you have a few days off. Remember after you feed your face and are relaxing, it's a perfect time to watch a movie, or listen to some good music. Enjoy your day, and make good times!!
Posted by Mitch at 8:34 PM No comments: 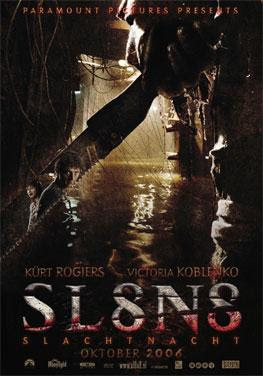 Dutch horror films? Can't say that I really recall seeing any other ones. I happened to catch the trailer for this film, and saw that it takes place in a mine. I am sucker for any horror film that uses this location. Of course we all know My Bloody Valentine, but I'll even search out the more obscure ones like this film, and Trackman(don't bother). This was released as SL8N8 in other countries, and I can't really see what that means, because instead of sounding like Slaughter Night, it comes out as "sleight-neight"???
Well on to the film. Years ago a notorious child murderer/occultist named Andries Martienes was killed by police, after killing and collecting the heads of 8 children. It was said that he could travel back and forth from Earth to hell, by performing this ritual with the heads. He was supposedly visiting Hell to see his parents, who hold the secret location of all the family fortune in gold that Martienes is always searching for. He had a location in an old mine, that he used for his "rituals". The police decide that he will be the "fireman" for the miners, as his punishment. This entails wearing a suit of wet rags and carrying a torch into the mines to search for Methane leaks. He is blown apart, and the police think this is the end of Martienes. Ha Ha, this IS a horror film we are talking about.
Cue to the present day, and 8(how ironic, huh?) kids go on a tour into the mines. One of the girls involved father, wrote a book on Martienes, and was recently killed in a auto accident. The daughter is picking up her manuscript for the book, and knows a little about the serial killer and his exploits. Where this film plays it different is, instead of the killer rising from the grave, to kill the intruders, his spirit travels between the bodies of the kids, leaving them to do his dirty work. This adds a Demons sort of element to the film, or perhaps The Hidden, or Jason Goes To Hell? I thought it was a very cool change from the typical slasher film. The gore is done really well, although most of all the kills are be headings, they very effective and realistic. It has a really cool "shovel in the mouth" kill that has been used in several other movies, but always impresses me, when done right. Like I said, it's a Dutch film, so you have to read subtitles, but a real film fan wouldn't complain about that. There a few plot holes, and inconsistencies, but again, this is a slasher film. I think it's a real fun film, and really shocking that it was made in this decade, one of the driest and tamest decades in horror history! It's available on DVD, and I got my copy from Netflix, so check it out! 7.0/10
Posted by Mitch at 10:20 PM No comments: 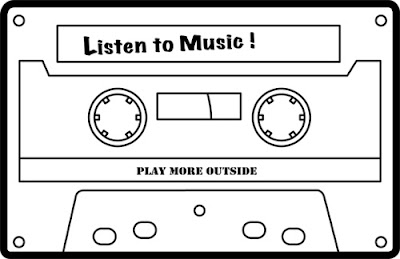 There is something amazing and transcendent about the perfect mix tape. Even though that mode of media has long since fallen from grace and we now use CD's. I will always refer to them as mixtapes. I was a teenager in the 80's, and us children of the 80's love our mixtapes. They can capture a certain period of your life, better than a photograph. What's better than throwing on an old mix that you have made, and revisit that time in your life? When you are going through something difficult, the mix can be your only friend. So tonight, I was feeling a little down in the dumps, and decided to make a new mix, something that always makes me feel better. The result was so fantastic, it flows, and nothing is out of place, and I haven't stopped listening to it since. I decided I would share the track listing, make one for yourself, and share the results.......you will feel better. 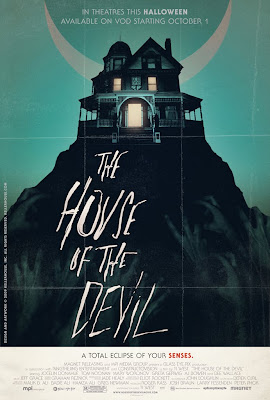 Here's a new one for all of you "sleeper-slasher" fans. Well, it's not really a slasher film per se, but you get what I am talking about. The House Of The Devil actually looks like a film that was shot in the 80's(aside from a few minor blunders), and sits comfortably among the great "quiet" films of that genre(The Unseen, Madhouse, Unhinged, Silent Scream). This film was just released in October to an obviously low number of screens, and is playing simultaneously on VOD channels. But if you are an Internet troll, you can find several places to watch it online for free.
The story concerns a young college student named Samantha, who is hard up for cash and is persuaded into a very strange "babysitting" job by the promise of a big paycheck. As I said before this is a very slow-building kind of film, and for the first hour nothing much happens except for Samantha wandering around the creepy old mansion, being scared by creaks and groans. Although I love gore, I do not feel that a horror movie needs to be loaded with it in order for me to enjoy. Just the promise of what might be there, is sometimes scarier than what is actually there. The weird couple that hire her(the female being the great, Mary Woronov), tell her that she is sitting with an elderly woman, and that she probably will never even see her. Things definitely get tense as Samantha discovers the reason that she is really there.
This is actually the first "throwback" film that I have been really impressed with. Everything about it screams 80's, right down to grainy look of the film. If you are one of the few who relish an actual scary story over gore galore, track down The House Of The Devil, you won't be sorry you did. 7.5/10
Posted by Mitch at 2:11 PM No comments: 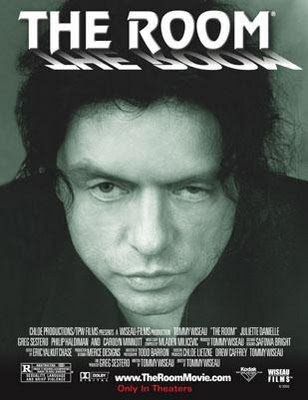 So for the few "regular" readers that I have, you have probably figured out that I am an aficionado of bad cinema. I will go out of my way to see a film that I heard is "the worst movie ever", before I search out a good one. So when I heard rumblings about The Room, I have to say that I was interested. Then on a news show, I think 20/20, there was a story about people in metropolitan cities lining up for miles to see this horrible movie, and I definitely had to see it. C'mon people were mentioning it in the same breath as Troll 2 and Manos, I was ready to give my left testicle to see this atrocity. Imagine my surprise when I saw that Netflix was picking it up and it would be out soon(yesterday). I added it to my que and bumped it up to the top!
So did it meet my expectations.....a resounding Hell Yes!! I had already explained the backstory to everyone who was watching it with me. I think it is better to witness this film with friends, don't worry, you won't stop laughing for days!! The Room is the brainchild of French actor/director(I use those terms loosely), Tommy Wiseau. He looks like the damaged child of Fabio, Stallone, and has the voice of Ah-nold(yes, that's Conan to you). Upon completion, he had imagined himself some sort of Tennessee Williams type genius, and that the Room was going to win many Oscars. Well, when this film hit the screens, the audiences were laughing throughout the entire run time, this was due to overwhelmingly bad performances from the actors, not anything intentionally. As the word spread, people started dressing up like characters, and bringing props to the movie, and memorizing lines ala' Rocky Horror Picture Show. After all of this buzz, Tommy Wiseau states that the film is supposed to a "black comedy", and all of the laughs were intentional. What a load of horse shit!! I am glad this film is so bad, I already want to see it again, as I missed several quotable scenes, and it will probably take a few views just to soak in the audacity of it all.
Oh, the plot?? Not much of one here, Johnny(Wiseau) is marrying Lisa, but Lisa is cheating on him, and doesn't love him anymore. What shall he do?? Sounds simple? Yes, but please see this, well....only if you are a fan of bad cinema. I promise you, you will thank me later, I thanked Wiseau all night long!!
Posted by Mitch at 11:46 AM No comments: