I distinctly remember seeing this, Mario Bava's last film at the Drive-In when I was a child. In the States it was released as Beyond The Door II, although it has nothing at all to do with the first film. I guess that American distributors thought that it would be an easier sell that way, even though the original was far from a hit here. I also remember this slow-burn, creepy little film, scaring the shit out of me! It is heavy on atmosphere, just the way I like them, but doesn't always make a lot of sense, but then again, when did Italian horror ever make sense? 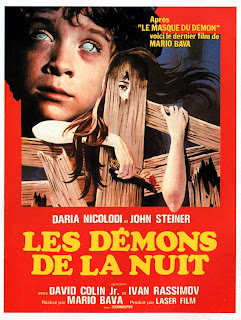 Dora and her husband Bruno move back into the sprawling house that she used to share with her now deceased ex-husband. She has an eight year old son called Bruno, who is the most entertaining part of the film. He doesn't know that his father is dead, and apparently committed suicide. Soon after arriving in the house, Marco begins to exhibit some very strange behavior. He feigns copulating his mother, puts razors between the keys of her piano, and becomes possessed by the spirit of his dead father. As I said earlier, the film is quite slow and can become "talky", but it's Bava, and the man knows how to create a tense atmosphere. By the films end, we find out that Dora had become a bit crazy after the death of her husband, and had to be committed for a while. We also learn that his body has been walled in the wall of the basement by someone? I can only recommend this to people who prefer substance, style, and atmosphere over gore and action. If that is you, definitely check this one out!
Posted by Mitch at 11:01 PM No comments: 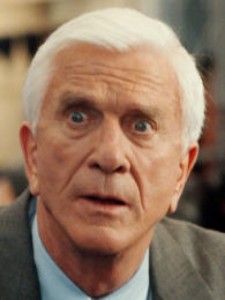 One of the funniest men ever, who also appeared in many genre films like Prom Night, Day Of The Animals, and Repossessed. I hope you are in a better place sir.
Posted by Mitch at 10:45 PM No comments:

The Slumber Party Massacre(1982)- I have always held a special place in my heart for the original entry in this franchise. There is something special about the film, beyond all of the feminist angles that have been leveled at it. It has a very nice, dark atmosphere, and the music is quite extraordinary for a genre film. It's crowning achievement in my opinion in Micheal Villella's performance as the maniacal Russ Thorn. The film gives no explanation other than Thorn has just escaped from a mental institution, for his rampage against the teen girls at the slumber party. There is no element of humor in his performance, while the film itself is quite humorous, herein lies the magic in the formula, that they never managed to reproduce. It's a short and compact film, that cuts right to the chase, and all of the performances are quite good for this kind of film. It's sad that most of the people involved have distanced themselves from the project, and wouldn't appear in the new documentary Sleepless Nights to discuss it. I know that girl that played Valerie, killed herself, but the only participants were the director, and one of the small roles, and Brinke Stevens. There are far worse films that you could be associated with in this day and age. I won't go into a plot synopsis of the film, as if you are reading this blog, I am sure that you are familiar with the film. If not, please check it out, a good time to be had by all.

The Slumber Party Massacre Part 2(1987)- In all of my years as a horror enthusiast, I have never understood what people see in this steaming pile of dung! I remember when it hit video, and I was 16 years old, I stayed home from school and went and rented it. Boy was I let down! I hadn't seen it since then, until 2 nights ago. Not much had changed for me, except that I can appreciate the whole "cheesiness" angle of it all. The performances are all funny, and it would be a great cult film like the first film, had the director not chosen to portray the villain that way. He comes off as a laughable cross between Andrew "Dice" Clay and Billy Idol. Any suspense that could have been wrung out of the film is ruined by his non-stop singing and dancing as he chases his victims. Don't even get me started on that damned guitar drill!! It really is a shame, because there are some great effects in this installment, the drill through the chest gag in this one, is a standout for the whole series! I don't blame Crystal Bernard for disowning it, and refusing to ever speak about it, I wouldn't either. 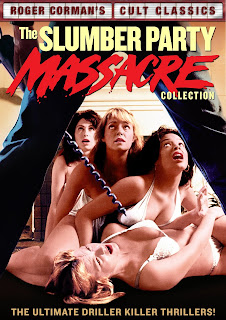 The Slumber Party Massacre 3(1990)- For some odd reason, for years I never knew that this installment existed. I never even saw until last night, and I was presently surprised. It seems that the filmmakers were at least trying to make a picture more in line with the first film. Even though the decision to make the killer a young pretty boy was baffling! His motive was kind of perverse and that was cool. There are plenty of red herrings in this one, and I didn't guess the identity until half way through, so that was pretty cool. Even though it was darker and gorier than the second film, they seemed to copy the cheesiness and silly dances and such from that film. I would say that it is a pretty even mixture of both of the previous films. But it definitely stands as my second favorite of the films. So if you wanna make a good night of it, skip the second and watch the first and the third. Good Times.
Posted by Mitch at 12:32 PM No comments: