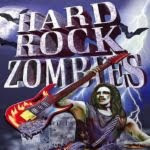 Every once in a while a movie comes along that is so bad, that you have to share it with your friends. Very similar in manner to when you taste or smell something awful, and then try to persuade your friend to do the same. I had seen the cover of Hard Rock Zombies many, many times on trips to the video store. I still can't recall what kept me from ever renting this horrid little treasure, I was a metal head, so it seems that this would call out to me, like the other films in the "metal horror" genre. Well, I never saw it until last night, and now I want to give myself 24 years worth of ass whipping for not witnessing this sooner.
This movie is so bad, I am almost at a loss for words to describe it. It's about an 80's hair-metal band called Holy Moses. They feel they are on the cusp of big things, so decide to hold a concert in the small town of Grand Guignol(tisk tisk), to impress a big record producer. Jesse, the bass player/vocalist has the most wickedest mullet ever captured on celluloid. He writes a song based on an "ancient ceremony" that has the power to revive the dead. There is nothing cohesive about this movie at all, and you get the feeling that the director was just trying to throw anything shocking in the film. We have a grandfather who is actually Adolf Hitler, grandma who is a werewolf, nazi midgets, and another midget that looks like a Ghoulie. There are synchronized 80's dance movies, bad lip-syncing, geriatric sex scenes, but it is the most fun that you could have in hour and half, and I can't wait to see it again.
After the band is murdered by the nazi family, Jesse's 13-year old girlfriend Cassie(she also has a song named after her in the film), plays Jesse's song, and the band are brought back from the dead!! There isn't a funnier sight than these goofballs shambling around like rejects from the Thriller video. If you are a connoisseur of bad cinema, I can't encourage you enough to see this(it's available through Netflix), and keep an eye out for the blond girl who dances through the entire movie.
Posted by Mitch at 12:19 PM