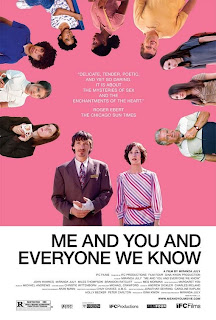 Other than horror films, my favorites are those quiet indie films, that are more character studies than anything else. Films where you have to read people's faces to see how they are feeling, and the nuances between people are more important than what is actually said. Me And You And Everyone We Know, is such a film. I have been in love with this film since I first laid eyes on it. It's definitely a "love it or hate it" film, there is no middle ground. If you like risky, emotional, and daring filmaking, check out this tour de force.
This film stars and was directed by Miss Miranda July, who is also a musician, performance artist, and artist. She touches on many taboos, but never goes for the gross out. High caliber acting performances also elevate this above the rest. Miranda stars as Christine, an artist, who also drives "elder cab", a service to shuttle around senior citizens. She falls in love with Richard, played by John Hawkes, who works in a shoe store, and is going through a divorce. He has two young sons, Peter and Robby, who spend their idle time in adult chat rooms, discussing the virtues of "pooping back and forth. This is not a film that can be easily described, and doesn't have a linear plot that I can just explain to you. It involves how each of the characters are trying to deal with a life that has been handed to them, that they might not exactly enjoy being placed into. There are several shocking scenes involved sexual matter and the children and teen characters, but they never come off as exploitative or pedophillic. Sometimes looking at this film, is like looking at a piece of abstract art, that you have to pontificate before making judgement.
If you like artistic films like Love Liza, All The Real Girls, or any of Gus Van Sant's "silent trilogy", you will definitely enjoy this film. Sometimes we need to see something that pushes the envelope in cinema, just to remind us that everything that comes out of Hollywood isn't pap. Do yourself a favor and spend an evening trying to get in the head of Miss July, you won't be sorry.
Posted by Mitch at 2:40 PM