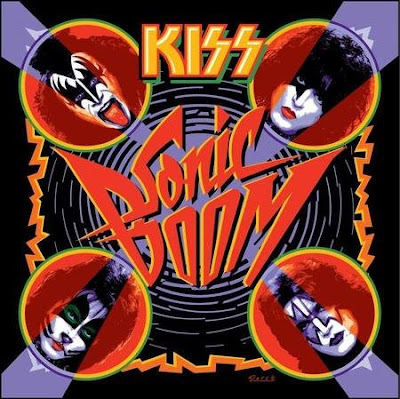 I've said it before, and I'll say it again, there isn't time I can remember that I wasn't a Kiss fan. I got my first record by them at the age of 2, having older brothers into rock/metal certainly had it's benefits. Gene and Paul do not always make it easy to be Kiss fans, they have made many wrong turns, and don't always use the best judgements. But the tried and true members of the Kiss Army always stick with them through thick and thin.
Sonic Boom, which officially comes out on October 6th, is their first album since 1998's Psycho Circus. That album was a monstrous letdown, and left many fans with a bitter taste in their mouths. Kiss more than make up for any bad albums, and the 11 year absence with Sonic Boom. This is first record with Tommy Thayer on guitar, even though he has been in the band at least 7 years. In my opinion, he is the shining star of this record, despite naysayers giving him a bad rap for not being Ace Frehley. His playing is very similar to Ace's, although a bit more adventurous and "in the pocket". Eric Singer, who returns on drums, has always been a better drummer than Peter Criss, and he proves this time and time again, in the live arena, and on this record. Paul and Gene offer their best performances in many years, and amaze me in that they still have amazing vocals, despite being almost 60 years in age.
To my trained Kiss ear, this record has the best elements of many past records. It has the production and guitar crunch of Rock N Roll Over, the choruses have the melodic ism and catchiness of the Dynasty/Unmasked era. There are even hints in some tracks, mainly in guitar tone, of the Animalize era, so in reality, there is something here for all fans. I have found after each listen, I want to immediately start the CD again, that is something I haven't felt about a Kiss record in a long time. I don't know exactly the reason they sound so reinvigorated on this record, but I am so thankful as a fan.
I am gonna list the songs separately and review them one by one, just so I can describe the differences nuances and details that us Kiss freaks love to obsess on:

"Modern Day Delilah" This is the first single off of the record, and is a Paul Stanley track. This is one of the heaviest songs on the record, it has almost a "Carnival Of Souls" vibe to it. This guitar sound is not typical of the record. Gene joins in on vocals with Paul and gives it a old-school feel vibe, along with the new guitar sound. I really think this song would do well on Modern-Rock radio, sadly if even released on radio, it will be relegated to the oldies stations. 4/5

"Russian Roulette" A classic Gene song! It is an anthem song, and one of Gene's best vocal performances in the entire catalog. His bass is very audible, and for once he plays his own bass lines, and shines like the old days. He is a remarkable bassist, and needs to remember that the bass lines on classics like Dressed To Kill, are what made them classics. Another song that sounds made to be blared from every radio in the country! 5/5

"Never Enough" This is my least favorite song on the record, but it's far from horrible. A Paul song in the vein of "Mr. Speed", it's very and anthemic and catchy. The problem lies in the chorus. Paul's phrasing and the repetedness of the title phrase kind of irritate me. But hell, to some people it could be brilliant. Aside from that minor complaint, it really is a decent song. 3/5

"Yes I Know(Nobody's Perfect)"- Wow, I don't think that a Gene song has ever been my favorite off of their records, but this one damned sure is! This is a driving song, and by that I mean 90 miles an hour, driving down the interstate, driving music. It has a very Stonesy swagger to it, and that is a side of the band that I love, and don't think that they have explored enough. The lyrics are typical Gene, sexual innuendos galore, but I still find them hilarious to this day. I want to just put this song on repeat for about 4 hours. 5/5

"Stand" This record just offers anthem after anthem, and I feel like I am 17 again. This is a Paul and Gene duet, and offers the usual "stand up and take pride in yourself" Kiss Army lyrics. This one could be a hit single as well, and I could picture it as a show closer, if they ever decide to retire "Rock And Roll All Night". The closing portion of the song is very similar to "God Gave Rock And Roll To You II" 4/5

"Hot & Cold" Another Gene barn burner with the innuendo lyrics. For some reason, it reminds me of "Christine Sixteen", minus the pianos. I have the same problem with song as I had with Never Enough......the chorus. It's not bad, it just sounds a bit sing-songy for my taste, but I can be a nit-picky bastard. I can picture the Gene Legions worshipping the hell out this song. There are some cool acoustic guitar bits in the breakdown, like they used to do. 3/5

"All For The Glory" This is Eric Singer's vocal debut on a Kiss record. It's a very heavy song, with blazing guitar riffs and solo from Tommy. The first thing that fans will notice, is how much he sounds like Peter. Very similar, but not as raspy, and definitely not a "copycat"(tisk-tisk). I hope they play this on tour, so Eric gets his time to shine. 4/5

"Danger Us" Clever lyrical pun aside, this is one of the best Paul Stanley songs in a long time. That is one mean feat in itself, considering how good Paul's solo album "Live To Win" was a few years back. This song has a different guitar sound as well, I like how they changed them up, and didn't stick with one sound for the whole record. It has a very bluesy sound that is atypical for Kiss. 4/5

"I'm An Animal" Damn, this is a "God Of Thunder" styled Gene song. This is Kiss' metal sound, much like "Creatures Of The Night", and wish Gene would have made a record like this instead of that "A$$hole" abomination, years back! Fists in the air, heads banging, it's fucking nice to have you back boys! 5/5

"When Lightning Strikes" In true sense of democracy, all the members got to sing a a song on Sonic Boom. This one is the first time Tommy Thayer has sang with Kiss. I am totally shocked at how amazing this song is. He sings like Ace, if Ace could actually carry a tune, with a twinge of Gene's aggressiveness. This is definitely a contender for my favorite song on the disc! The guitar solo that he provides is awesome, I wish people would judge him on how well he plays, and not what make-up he is wearing. 5/5

"Say Yeah" Paul closes the record out with a balls out rocker. It sounds pretty modern for Kiss, and wouldn't have seemed out of place on Asylum. It has a "big" chorus, with multi-tracked vocals, that give it an 80's feel. This is the most "commercial" sounding song on the record. 3/5

I really could go on and on for hours with details and observations about this record. I won't do that, I will say that I love it, and I am really happy about the results. Paul and Gene always hype up their new records as the "best record since Destroyer", in this case they weren't far off the mark. It is a very good time to be a Kiss fan. The record will be in Wal-Mart(GAG!!) exclusively on Oct. 6th in a 3-disc format for $12.99. That store will also have a "Kiss Korner" set up soon with all sorts of merchandise. They are out on tour right now, and will be playing here in Florida(Pensacola, see ya there), on Oct 19th. They sound rejuvenated and have a new lease on life, theatrics aside, they are a damned good rock n roll band. You should always remember, it's never too late to join the Army!!