Nightmare(aka Nightmares In A Damaged Brain)(1981) 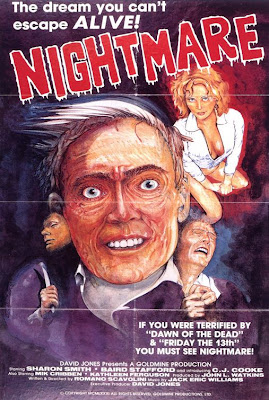 Nightmare is absolutely one of my favorite horror films ever. Along with The Exorcist, and The Texas Chainsaw Massacre, it's the kind of film that sticks with you long after you view it. It's not quite as grimy as Henry: Portrait Of A Serial Killer and not at sleazy as Maniac, but both of those films are reference points. While very popular in slasher circles, Nightmare has garnered a bad reputation for misogyny, and bad acting. I don't really see the misogynistic claims, because most slasher films from that period, were sort of cruel to women. As far as the bad acting, what great slasher didn't have at least one sub-par performance? The amazing special effects caused quite a stir, as the filmmakers claimed that they were done by Tom Savini, and he alleged that he only consulted. Who ever did the effects, they are great for the period. The music is very eerie, and lends the overall atmosphere, the theme is sort of Halloween-like, but that can be forgiven. When I saw this film as a child of 10, it utterly scared the hell out of me!


The story is about a schizophrenic/homicidal maniac named George Tatum. As a child, George came home from school, to discover Daddy and some hot little number, acting out some light S & M action. After George sees the vixen slap Daddy around for a few minutes, he heads to the wood shed to retrieve an axe. He comes back, and chops the girl to bits, and plants the axe in Daddy's dome. Years later, after years of therapy, George is released from the institution, supposedly "cured" with the help of modern medicine. George immediately heads to Florida, to stalk the Temper family. A young mother and her 3 children, Susan would definitely NOT win any mother of the years awards. She spends most of her time, cavorting on a sailboat with her hirsute lover. CJ, the only boy of the bunch, is about as obnoxious as any kid can be, and torments his mother and sisters endlessly. Meanwhile, George is killing already on while making his way to Florida. George has several "fits" along the way, and vomits white foam, and seizes on the floor. He has horrible flashbacks of the murder of his father and the mistress, yet we do not know his bond to the Temper family, and if he wants to kill them.

There are several greats scenes in Nightmare, the one that most people speak of are the Times Square scenes. Very sleazy and nostalgic at the same time, films like these are the only way to see how Times Square looked before it was cleaned up, and stripped of all it's charms. Several of the murder scenes are done remarkably and stick with you long after. The aforementioned double S & M murder has became classic in the horror scene. The beheading of the harlot, if it wasn't done by Savini, was definitely influenced by his work. The first murder that George commits while on the road, a throat slashing that is done so well, I still cringe every time that I see it. Lastly, the ending stalk n' chase scenes between George and CJ are tense and exciting. George dons an evil Devil mask, for added effect. Nightmare is definitely not a well made film, but for what it is, it's a total class act. I can't think of many other films of the era, that still pack that punch when it comes to repeated viewings, and Nightmare still delivers to this day! Sadly, it has still not been released on DVD in the USA, but you can still score VHS copies, and DVD-R's quite easily. Be sure that you get the Unrated version, if not you will miss out on those glorious effects.
Posted by Mitch at 8:31 PM