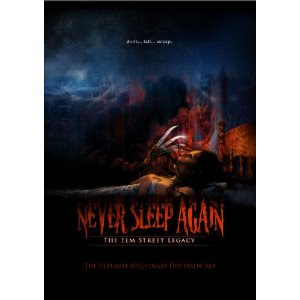 This 2 disc documentary on the Nightmare On Elm Street horror franchise, is a Freddy fan's dream come true! This thing is exhaustive, 8 hours total, and totally satisfying. I myself, am not this biggest fan of this franchise, and I still watched every bit of it. The first disc is the actual documentary, and it is 4 hours long. It moves chronologically through the films(and even the show Freddy's Nightmares), and has interviews with the directors, the cast, the special effects crew, the writers, and even New Line mogul Robert Shaye. It's always fun to see the cast as they look today, and some of them are shockingly different! Of course, the big stars(Johnny Depp, Patricia Arquette, and Breckin Myer) are absent, obviously ashamed of their humble beginnings. It's also cool to see them address the "gay rumors" that have been circulating for years about Part 2. The second disc is all Bonus Features, another 4 full hours of them. There are extra interviews, location scouts, Nancy pimping her new DVD, and plenty of Freddy glove makers/collectors. For a horror nut, there's not a better way to spend an afternoon.
Posted by Mitch at 11:28 PM