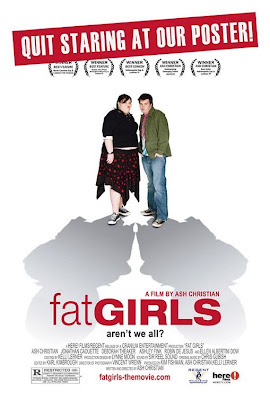 I would have to say that I would put Fat Girls in my Top 5 "gay oriented" films of all time. It is a very funny film, that manages to escape all of the pitfalls that gay films usually fall into. The leading role Rodney(Ash Christian, also the director), is nothing special to look at, and bears a lot in common with Napoleon Dynamite. He lives in a rural Northern Texas town, with his psychotically Christian mother, and has a best friend in "fat girl" Sabrina. Rodney narrates the film as well, and describes throughout the film, what it takes to be a "fat girl", and you neither have to be fat or a girl to embody the title. While he is made fun of at school, the football captain also has secret sexual liaisons with Rodney, so he isn't without hope at all. He decides to invite Joey, the very gay, English kid who just moved to their school to go to the Prom with him. He also discovers that his favorite teacher is also a drag queen that performs Liza Minnelli numbers at the local gay bar, affectionately called BJ's.

The whole film is a wonder to look at, despite is low budget. The actors are all wonderful, and the film leaves you feeling wonderful. That is something that most gay films can never achieve. If you like films like Napoleon and Ghost World, you will most definitely like Fat Girls, despite the gay subject matter, a fun movie is a fun movie!
Posted by Mitch at 11:53 AM