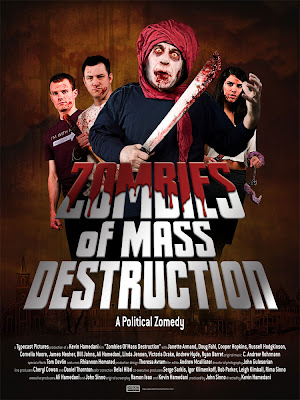 This is the first film that I have seen in this year's batch of After Dark Horrorfest films. And for better or worse, I plan on reviewing all of them this year, so it was great to start out on a high note. I think After Dark started out as a big joke amongst Horror fans, and slowly but surely are making small steps to rectify that. Last year had a few surprisingly decent films, and I heard buzz that this year's batch was supposed to be the best, so I am taking the challenge.

Zombies Of Mass Destruction is being marketed as a "political zomedy", and while those words make me want to barf, it's a pretty apt description. In my opinion, this is a more interesting film than either Shaun Of The Dead or Zombieland. The story is simple enough, a small island town called Port Gamble, is being infected by a Zombie outbreak. The interesting part of the story is the characters, most of them are actually likable, and each character represents a social group, and how bigotry still remains prevalent during such a crisis. Call it Towelhead meets Dawn Of the Dead for a good description.

Frida, who is an American born Iranian gets her share of bad treatment in ZMD. Her dad runs the local diner, and desperately wants Frida to marry an Iranian, and continue the traditions of her heritage. She however, like any American teenage girl wants to date a bad boy, and party her nights away. When the outbreak comes, it is immediately blamed on terrorists, and of course Frida is the local object of scrutiny. In the mean time, Tom has returned home to Port Gamble with his boyfriend Lance in tow, to come out to his widowed Mother. By the time he gets to do so, Mommy has been infected, and Tom still feels the need to confess, this scene is comedic gold. The local church thinks that the outbreak has been brought down by all of the evils in the world, primarily homosexuality, so when Tom and Lance ends up barricaded in the church with them, things definitely get tense. This is not a prefect film by any means, but it is so nice to see a film where a gay couple is portrayed in such a positive light, it warms the heart. I'm sure that there will be Internet warriors up in arms about how the zombies look, and remain completely oblivious to the said social commentary that is introduced in this film. That's really sad, I would hope that everyone, would come out of the film a little pissed about some of the injustices in the world. Good job, After Dark, now I am looking forward to.......Dread.
Posted by Mitch at 8:28 PM