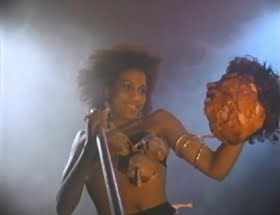 I am still on a late 80's kick, and I knew sooner or later it would get me in trouble. While going through old VHS to watch, I stumbled across Halloween Night, and didn't recall seeing it, so I threw it in. Soon enough, I realized that I have seen it, and have it on DVD under the title Hack O Lantern. This was directed by Indian born Jag Mundhra, who also helmed Open House, and countless soft-core thrillers. Halloween Night is one of the most unintentionally funny horror films since Sledgehammer. The acting is so OTT, it seemed as though the actors thought they were trying out for Days Of Our Lives. In fact, the "top billed" actor, Hy Pyke(awesome name), acts more like a drag queen than the "satanic grandfather" that he is supposed to play. Still the sadist in me lapped up this overwhelming pot o' cheese, like it was an elixir of life.

The story centers around a young boy named Tommy. In the prologue Tommy is met by his grandfather(the aforementioned Hy Pyke), who gives him a pumpkin, a rubber skeleton, and a satanic amulet. He tells him not to show the amulet to anyone, and not to let them know it came from him. When Tommy's mother finds out that the pumpkin came from her father, she smashes it to bits, and tells him to never see the grandfather again. She then tells her husband what happened and goes into a tirade about how she hates her father, and all of the evils he has caused. The husband takes it upon his self to go and threaten the Father to stay away from young Tommy. When he arrives, he stumbles upon a satanic ritual in the barn, and the grandfather smashes his brains out with a hammer, and burns the father in a car.

Cut to the future, and Tommy is supposed to be a teenager, although he looks to be 35 at least. He still lives with his Mother, who is still trying to keep him away from her father, who is rearing Tommy to be the high priest of his Satanic coven. It is Halloween, and Tommy's sister is gearing up for the big party, and Tommy's little brother is now a policeman. The usual hijinks occur, and all of the teens start showing up dead, and you can probably figure out who is responsible. The performances are just so ridiculous, that it's impossible to look away. There are also some random, WTF moments that make this film laughably great. In one scene Tommy puts a cassette in Walkman, and is transported into a Heavy Metal video by the band, D.C Lacroix(yeah, I missed out on those guys too). It's one of the most cheesy and garish moments in any horror movie ever, and reminded me of the White Sister segment in Killer Party. Also, there's a random comedian that shows up at the Halloween party, and delivers the lamest performance ever. It all had me wondering just exactly what the hell the director was smoking while making this movie? I am not saying that this is a good film by any means, but if you like retarded cinema as I do, this is perfect fodder for "bad movie night".
Posted by Mitch at 12:45 PM