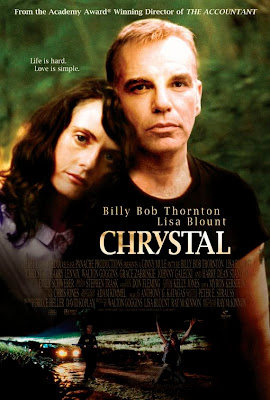 Wow....that's the most apt word that comes to mind right now. Chrystal is a mind blowing movie, and I loved every second of it. I saw it when it came out, and I just had my 3rd viewing last night, and it hasn't lost a bit of it's power. It's one of those films that sticks to you and haunts you for days. It really is quite sad that Ray Mckinnon(director and actor) and his wife Lisa Blount(actor) did not win Academy Awards for this film, because it's a far superior film to last year's Precious, it just goes to show how much clout Oprah has. This film has been described as Southern Gothic, and I think that is a perfect description. It has moments of Carson McCullers and Tennessee Williams, and this is the only role that I have liked Billy Bob Thornton in aside from Sling Blade.

Joe(Thornton) and Chrystal(Blount), and their little boy, Joe Jr, begin the film by running from the law. We don't know what they are after Joe for, but Chrystal seems concerned. Perhaps too intoxicated, Joe over corrects a turn, and they slam into some trees and down an embankment. Joe is thrown a few hundred feet and knocked out, but otherwise fine, Chrystal is thrown through the windshield, she suffers a broken neck, and several more problems. Little Joe's body is never discovered, and he is presumed dead.

Cue 20 years in the future, and Joe is released from prison, and returns to home to Chrystal, to try and get forgiveness from her. Aside from her physical ailments, Chrystal also has had some brain damage, although it's nothing too serious, she is prone to outbursts at times. One of the earliest scenes, shows Chrystal in the back seat of her car, allowing 4 teenage boys to take turns on her in the backseat. She explains at a later date, that sex is the only time that she is not in constant physical pain(and probably emotional as well). Joe comes back, they hardly ever speak, he sleeps on the porch, and starts cleaning up the land and gets himself a welding job. Meanwhile Snake(Mckinnon) wants Joe to return to growing pot like he did back in the day, and Joe refuses to do so. Mckinnon sets up Joe, and the DEA comes and raids their house. Joe disappears into the woods......cue another year in the future.

Snake vows to take revenge on "Crazy Chrystal" as he calls her, little does he know that Joe is still watching over Chrystal from the woods. There are so many amazing scenes in this film, that it would take forever to detail. But the fight scene between Joe and Snake is amazing. Part Three Stooges, and part Deer Hunter, is amazing how much emotional depth that the filmmakers have put into this film. Many "southern" films feel so fake, but Chrystal is the real deal. I could watch this film once a week, for the rest of my life, and still get something out of it. To avoid spoilers(which I hate), I will leave it that. But if you love real films, with emotional depth, and amazing performances from all involved(also includes Harry Dean Stanton, Grace Zabriske, and Johnny Galecki), please rent or buy Chrystal, you won't be sorry. It's just a shame the Academy didn't notice it.
Posted by Mitch at 9:46 AM