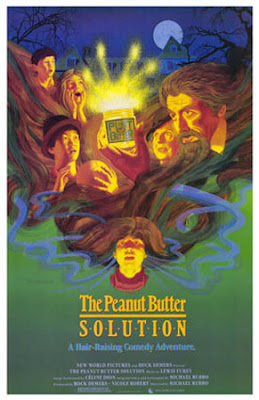 The Peanut Butter Solution is one STRANGE children's movie! I have always loved it, I remember my sister and myself discovered it via repeat viewings on HBO. Later I bought the VHS from a video store where I worked in High School. I have always been a fan of fantasy oriented children's films like Labyrinth, The Dark Crystal, and Clash Of The Titans. But there was something different about TPBS, it has such a claustrophobic atmosphere and dreamlike aura, that left you wondering just what you had witnessed. Recently while doing some research on IMDB, I found a small army of 20 and 30-something's that have been left scarred by this movie. The reoccurring theme amongst all of them, seems to be that they could only remember fragments of the film, and they all thought it had been a dream. Many of them said that they had tried to describe the movie to others, and that people thought that they were making it up, or on drugs. While it didn't scar me as much(I was 14 when it was released), I can certainly attest to it's hallucinatory effect.


The Peanut Butter Solution is a low budget Canadian film, in fact, it looks as though it could have been made by PBS. Michael is about 10 and lives with his father, who is an artist, and his sister Suzy, who may be a few years older. One day Michael helps out a homeless man with a few dollars. Later in the day, he sees the hobo going into a burnt out old mansion. Michael follows him into an upstairs window, and sees something so frightening that it causes him to lose all of his hair! While passed out, he is visited by ghosts that give him a recipe that will restore his hair again. Michael makes up a batch of the oogy mess made up of you guessed it, Peanut Butter, and few other nasty things. He spreads the glop over his head, and when he wakes up the next morning, he already has quite the head of hair. The solution actually works too well, and after a few days his hair is trailing on the ground. The hair causes him to get into all kinds of trouble, and kids love to pull it, and tease him about it. Michael's best friend, the uber adorable Conrad or Connie for short, convinces Micheal to give him some of the solution, which he applies "down there". Needless to say, Connie's pubes are coming out his trousers soon.

The movie takes a sinister turn at this point. The children's eccentric art teacher, The Signor, kidnaps Michael & Connie to use their hair for "magical" paint brushes that he is manufacturing. He has a warehouse set up, and tons of children that he has taken to use as slaves in this factory. These brushes are indeed magical, and when they are used to paint, the images become real. It is now up to Michael's sister and his father to track down the kids and solve the mystery. Michael also has to figure out the mystery of what he saw that caused him to be in this predicament. I have never seen a more "out there" film that was made with children in mind. I often wonder if the makers of the brilliant "City Of Lost Children" had seen TPBS solution a time or two? Unfortunately, this has never had an official DVD release. You can find DVD-R transfers of it(that's what I have) or a cheapie import that Amazon stocks sometimes. The VHS can get quite expensive, so if you see it cheap, pick it up, you won't regret it.
Posted by Mitch at 5:35 PM