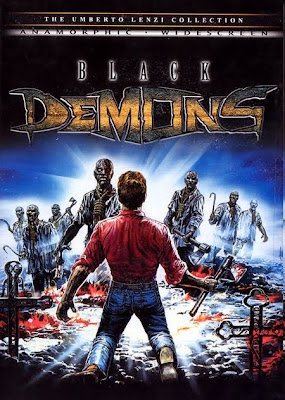 Umberto Lenzi has made some really good movies, like Make Them Die Slowly and Ghosthouse, but he has made some stinkers as well. I would say that Black Demons is somewhere in the middle. In some places, this had been retitled Demons 3, but has absolutely nothing to do with the Demons saga. This is about an American brother and sister, and the girls boyfriend who go to Brazil for reasons that are never explained, I think it's to take pictures? The brother is obsessed with Black Magic, and sneaks off to take part in one their rituals. He becomes possessed by an evil spirit, and wears an evil serpent amulet to prove it. He has recorded the ritual on a cassette and listens to it over and over. The party's Jeep breaks down and they seek refuge in a huge, dilapidated villa, with a couple that they have met on the road. The couple has a maid that is schooled in the ways of Black Magic as well, and recognizes that Tommy is possessed.

Tommy later goes to an ancient cemetery, and plays the ritual tape on his Walkman. This brings to life 6 black zombies, the corpses of slaves that were killed by the evil hands of the white man! This all sounds like it would be a hoot, and sometimes it is, but Lenzi adds so much dialogue, and illogical padding that they film ends up being pretty boring. It's a shame because the black zombies(not really demons at all) look really cool, and the film has some very atmospheric shots. The gore is pretty good, although the ripping out of eyeballs gets really overused in this film. It's actually not dubbed, which lets you see how atrocious the acting really is. So be wary of this film, it's only mediocre, and I only recommend it to Lenzi or Italian completest. That really sucks, because I want to love this film, it looks really good for being shot in 1990. If Lenzi wouldn't have added so much silly dialogue, and added a few more kills for pacing, this would have been a B-movie masterpiece! Caveat Emptor.
Posted by Mitch at 10:43 AM