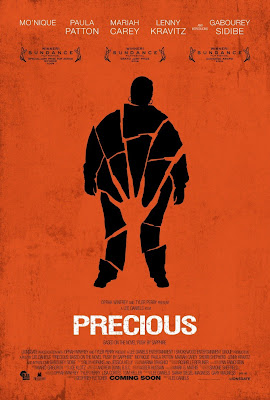 I was a little hesitant to see this film, and then review it, just because of the hype surrounding it. Yeah, I am one those guys. Hype, deserved or not, can ruin a movie experience for me. For that reason alone, I do not have any desire at at all to see Avatar. Precious was a little different, my partner Jeff, had been waiting on this since it came out, because it never played in our town. I have nothing against a heavy drama, and I actually like Monique quite a bit. So last night we got a copy from Netflix, and our best girlfriend came over for a tear-fest.

Most people know what Precious is about, she is a 16 year old, pregnant with her 2nd child by her father. Her home life is simply horrible, Mary, her mother(Monique), is a vile beast, full of hatred and disgust towards everyone, especially Precious. Mary throws things at her, knocks her out, talks to her like a subhuman, and even molests her as well. This is the kind of film that sticks with you for days. I had dreams about the film all night, and truly, it was far scarier than any horror film. Real life demons are far scarier than movie monsters. Coming from a family that was no prize itself, I can relate to some of the things that Precious felt, and the way that she coped.

Although it's an emotionally devastating film, there are some nice moments, and moments that will put a smile on your face. Precious attends an "alternative" school, after being thrown out of Junior High, for being pregnant. The teacher(Blu Rain, what a cool name) and the girls in her class befriend her, and make her feel loved for the first time in her entire life. The classroom shots are great, because you feel so happy for her, knowing that she is finally learning to read, and for a short part of the day, not being abused. When things turn bad for Precious, she slips into daydream mode. She envisions her self many things, a thin white girl, a video vixen, a movie star, and it's in these scenes that Director Lee Daniels really takes the film to another level. The supporting cast are all really good, and I was very surprised at the performances of Mariah Carey and Lenny Kravitz. I could go on and on, at how many different shocking acts that Precious and her 2 children are exposed to, but I won't. As I always say, you will know if this kind of film is for you. It's a completely different genre of film, but it actually left me feeling like I did after watching Schindler's List, or even Henry: Portrait Of A Serial Killer. It's that disturbing.

Films like Precious need to be made. When they are backed by heavyweights Oprah Winfrey and Tyler Perry, a lot more people are going to see it than otherwise would. Real films make a mark on your life, leave you with something, or teach you something, I think that Precious has done all of these. Also, Monique really did deserve the Oscar for this performance. She made me absolutely loathe her, and that's hard, because she is such a like able and jovial person, true acting indeed. It also makes up for such horrible films like Tyler Perry pumps out in the name of Black Cinema. This is a remarkable film, if you can handle such devastation, I recommend it whole-heartily.
Posted by Mitch at 6:43 PM