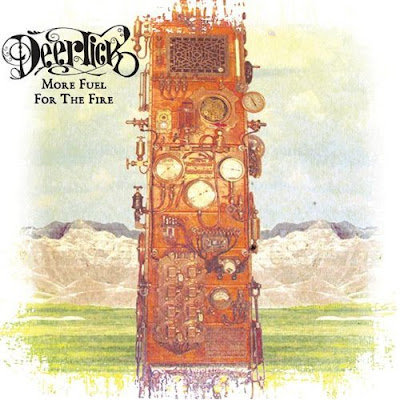 In a few short years, Deer Tick has became one of my favorite bands. Their blend of country, bar rock, and 50's music, is so pleasing on my ears, that their CD's usually stay in player for months. This little EP(4 songs) is so addicting, I can listen to it 5 or 6 times in row, without it becoming a nuisance. Since it is only 4 songs, I will give a track by track description:

1.La La La: This song, in my opinion, is the best song Deer Tick has ever recorded. It's too bad that it only clocks in at a measly 2:16. It's a very upbeat number, with beautiful backing harmonies supplied by drummer Dennis Ryan. It's the kind of harmonies not heard since the heyday of Gram Parsons tenure with The Byrds. I defy you to listen to this song, and not dance or tap your feet.

2.Dance Of Love: Another short(1:53) upbeat number, but this one has a more rock n' roll feel than La La La. This wouldn't have sounded out of place on their first record, War Elephant.

3.Axe Is Forever: This is my second favorite song on the EP. A little slower than Dance Of Love, but rocks out even harder. In the real world(if it wasn't obsessed with ghetto-culture), this song would be blaring from every radio in the country, yes, it's that damned good!

4.Straight Into A Storm(Live): This is a live version of my favorite song from their last record, Born On Flag Day. It is a barnburner, full of piss n' vinegar, it's just too bad that the recording isn't so great. It's a bit muffled, and that's a shame because drummer Dennis Ryan busts out some crazy blast beats in this song.

If you are a newcomer to Deer Tick(if so, please rectify that)this is perfect place to start. Sometimes short EP's are great introductions, because the listener doesn't have to devote that much time to get into it. This whole record only clocks in at about 11 minutes, and if you don't have 11 minutes to get into a great band, then maybe you shouldn't be listening to music. These guys should be huge, and mega stars, but in a country that worships shit like Lil' Wayne and Beyonce, a band with real talent doesn't stand a chance! Please spend some time with Deer Tick!
Posted by Mitch at 5:55 PM