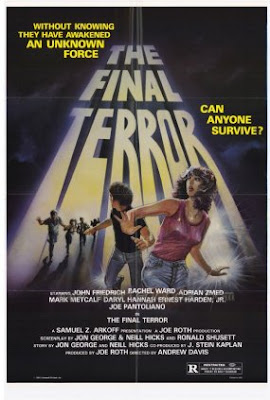 The Final Terror is one of my favorite horror films of all time. As I said in my underrated slasher series a while back, it also has a very bad rep among horror fans. Perhaps it's my deep love for this backwoods slasher that keeps me from understanding the complaints levelled at this movie? Boring....absolutely not, in fact, not only do I find the story to be entertaining, but it's also believable, something that doesn't happen too often in slasher films. The acting is very good for a film of this type, in fact, it had several stars that had done bigger films(Mark Metcalf,Adrian Zmed)and some that would go on to do bigger things(Rachel Ward,Daryl Hannah,Joe Pantoliano). Another element that makes The Final Terror amazing is the shooting location. Shot in the Redwood Forests of California's National Park, it looks very sinister, and only second best to the woods in Just Before Dawn. The other criticism that I hear in reference to this film, is that it's dark. What I think most people do not understand, is that has been a problem with transfers. If you see a good print of The Final Terror, it's not dark at all. The only scene that I recall that is dark, is the ambush of Daryl Hannah, and I think that adds to the atmosphere.

When a group of forest rangers and some girlfriends go the forest to do some work, and more relaxing, they run into a killer that doesn't want them there. Yes, I know, it sounds like about 327 other slasher films that came out in the 80's. I will not argue with you there, and I am not purporting this to be high art or anything. It's just an above average entry to the "killer in the woods" sub genre. The film offers up several red herrings, and keeps you guessing, until we get the first glimpse of "the killer". This element alone separates The Final Terror from many of the others. The killer wears a very unique disguise, that I like to refer to as "forest camo". It's a suit of moss, and forest debris, which helps it blend into the trees and against rocks. Some of the most effective scenes in the film are of the predator emerging from hiding and you see that it's been watching the rangers.

As I said above, the plot is believable, the rangers tell the obligatory campfire story that is always a description of who is stalking them. This story was about a teen girl who was raped by her uncle, impregnated, and then put in an asylum, to waste away all those years, until her son comes and rescues her many years later. Unable to deal with the wild woman, he leaves her in the woods to be away from from a society that she can no longer cope with.It seems that the woods happen to be where the campers are right now. This story prompts Eggar, the bus driver(Pantoliano) to freak out and lash out at the rangers for telling such a horrible tale. He leaves, with the bus, and the campers are at the mercy of the woods, and the wild woman. There is atmosphere aplenty, and that is ingredient numero uno for me in horror films. The characters are all very like able, and you care about most of them. If you haven't seen it, definitely search it out, it doesn't have a huge bodycount, but that doesn't matter in the least. It also defies the "final girl syndrome", by having multiple survivors. It has been released under many other titles like Campsite Massacre, Carnivore(how stupid),The Forest Primeval(a good one actually), and Three Blind Mice(????). Are there any other fans of one of the best sleeper-slashers ever?? We don't wanna hear any haters!
Posted by Mitch at 9:17 PM